It was no accident that George Robinson became a pioneer in the balsa wood surfboard revival. Given his talents, passion, background, and lineage, it was all but inevitable. George grew up in Florida, where he started surfing at a young age. But he also had roots in Ecuador, his father’s native country. By coincidence, Ecuador is the source of over 90 percent of the world’s balsa wood. During his frequent visits there George took advantage of the world-class waves, but also got acquainted with the benefits of balsa wood. He observed the excellent performance of local balsa surfboards, which were more common than foam boards there at the time. He also noticed something else: Ecuadorians had been building and using balsa rafts for centuries. These crafts were made of raw, untreated wood, and subjected to the most extreme conditions—searing heat, saltwater, constant buffeting from the surf. And yet they endured, decade after decade.That sparked George’s interest, and inspired his career path. A natural craftsman, George had already built his first polyurethane board while still a teenager. In 1972 he opened Mar Bravo, the very first surf shop in Ecuador—which he stocked with about fifty of his own creations. Back in the states, he began building his reputation as a premier shaper and builder. At one point he owned and operated the largest surfboard factory on the eastern seaboard. But there was something about balsa wood that kept drawing him back. Part of it was that quality no foam board possesses—natural beauty. George remembers applying the finish to his first balsa board and watching it bring out the complex grain patterns of the wood: “I just said, ‘wow!’” And from then on, he was hooked. “It gave me the satisfaction of building something really beautiful,” he recalls. In 1974, George began bringing balsa wood back to the United States, and established his niche as apreeminent balsa board builder. This was a daring move in an era of polyurethane and mass production. As he says, “The whole industry had forgotten about balsa wood.” But the quality of George’s boards made the industry take note. In 1976 he showed up at the Surf Expo trade show with twelve of his balsa boards and blanks—and a revival was born. George’s reputation can be traced to his peerless craftsmanship; he rejects the common technique of building hollow boards with struts and veneer, like an airplane wing. His boards are solid balsa, chambered to yield the optimum weight. But he also avoids over-chambering, which can make boards unnecessarily weak. Beyond these fine points, George has a secret advantage that none of his competitors can match—his connections in Ecuador. In the end, he says, “it's the quality of wood you purchase that makes the difference--period.” One of George’s family members in Ecuador had a neighbor who just happened to own the top balsa mill in the country. George developed a friendship there that has yielded lasting benefits. “He wants me to have the best,” George notes. That means wood that is not just top quality—but exceptionally light. “The wood that I get very few people on planet earth get to see,” he confides. As a result, George’s boards are often lighter than comparable foam boards. With beauty, durability, and an ideal weight, surfers have the best of both worlds. As a legend in the surfboard industry, George Robinson could make a lot of money by leveraging his reputation on a mass scale. Instead, he’s happy building a limited number of boards each year—knowing they’re simply the best in the world. 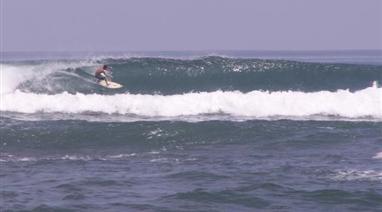 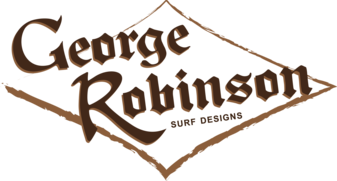 "From Seed To Surf"

"It's the quality of wood you purchase that makes

(Top Right) Photo of George with a balsa quiver. 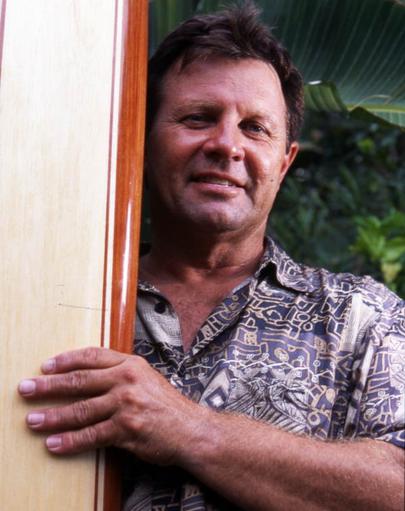 George Robinson Surf Designs About Us

George Robinson was born 1953, and grew up in the south Florida suburb of Miramar. He participated in water sports from an early age. His father was an avid diver, so George began skin diving when he was about six years old and had his own scuba equipment by the time he was ten. In his early teens Robinson and many of his peers were attracted to the image and life style of surfing, which had spread from California to the East Coast through recordings by the Beach Boys and other groups, surfing and beach party movies, and surfing magazines. In the spring of 1966 he began to surf in the calm Atlantic waters off south Florida beaches near his home.

Robinson and his sister spent the summer of 1966 with paternal relatives who lived near Guyaquil on the coast of Ecuador. In Ecuador, he surfed in the Pacific Ocean on locally made balsa wood surfboards. Rides on the world class waves lasted up to five minutes per wave-quite a thrill compared to the five or ten second rides which were the norm in south Florida. As a result of his summer surfing in Ecuador, young Robinson became even more enthusiastic. In 1968, while a sophomore at McArthur High School, he started Florida's first high school surfing club.

Many young surfers try to make their own balsa wood surfboards, but most realize the process is much more difficult than they had thought and quit after one or two attempts. Robinson began his experiments in surfboard making in 1970. He had a knack for grasping the principles necessary for good balsa wood surfboards and was tenacious in his quest to master the craft. By 1972, with some minimal financial assistance from his father, he opened the Mar Bravo, or "big surf," sports and surf shop in Ecuador. He stocked the store with about fifty polyurethane surfboards he had made himself-quite an accomplishment for a seventeen-year-old.

Like most surfboard makers, Robinson learned his craft by combining practice with the observation and analysis of the techniques of successful builders. Robinson credits Johnny Rice, a renowned California shaper who was brought to Florida to make surfboards, as one of the major influences in his journey to becoming a master shaper of both poly and balsa wood surfboards. Having family connections in Ecuador also proved beneficial as Robinson tried to establish his reputation as a surfboard maker. About ninety-seven percent of the world's balsa wood is produced in Ecuador. Robinson could buy the balsa directly from mills in Ecuador and his cousin, who owned an air cargo company, gave him free air freight. Thus, he was able to make balsa wood surfboards blanks in Florida at a cost competitive with polyurethane foam boards. Before he was twenty, he had achieved a reputation for making quality balsa wood surfboards.
Like nearly all surfboard makers, Robinson is a lifelong surfer. Throughout the 1970s he actively engaged in competition, and in 1978 won the United States East Coast Championship. He was also a serious competitor in windsurfing. Today, Robinson's excellent physical condition and youthful enthusiasm belie his forty-seven years. He still surfs regularly and is planning a comeback in competitive surfing.